How to make a king 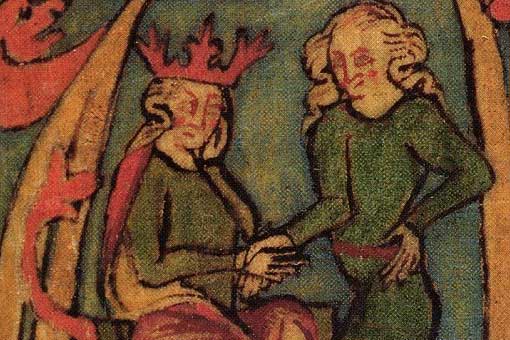 One day the Earl of Bogland visited his friend the King where, over a luncheon of tasty raspberry muffins, pumpkin soup, asparagus hollandaise and succulent squid pie, the Earl innocently mentioned that he too wished to be a king.

“Well,” observed the King, “you don’t have a castle, my friend. In fact, that beaver’s lodge that you call a house isn’t really even fit for a beaver.”

“But I have just as much claim to be a king as you do,” objected the Earl, pointing out that his great grandfather Fledrick had been a king.

“Doesn’t matter what color your blood is, Earl. I’m telling you, get yourself a castle.”

So the Earl went home, determined to build a castle and become a king.

Looking around his soggy lands, however, he wasn’t sure how to get started. Castles were built of stone, he decided, so that’s what he needed. He could do this, he thought. He pictured noble ramparts and soaring towers. He ordered his retainers to gather up all the stones they could find and bring them to the driest patch of Bogland and there, a day later, he began building his castle.

It so happened that the King was hunting that day and chanced to ride by the Earl, who was sweating and swatting mosquitoes as he stacked stones. He’d managed to stack a ring of stones knee-high and about thirty feet across, and he was already running low on rock.

“Have you lost your mind, Earl?” asked the King from atop his mount.

“No, your Highness. Just taking your advice and building a castle.”

“And just how many castles have you built? Zero, I would say from the look of things. Building a castle is something you should leave to the professionals. What you’ve got there, I’d say, is more of a duck paddock.”

Earl gazed about dejectedly at his work. The King was right. Several ducks were settling in nicely within the walls of his castle.

“You need an architect, an engineer, stone masons, wood crafters, and blacksmiths. A castle in name only won’t make you a king.” And with that the King rode off chuckling.

“Drat,” thought Earl. He imagined that it might cost quite a bit of gold to hire all those specialists. Still, if that’s what it took to be a king then that’s what he would do. He saddled up his mule and rode into town.

At the first castle-building company—Blogget & Sons—the Earl was greeted with tea and crumpets and ushered into a plush room.

“What have you got to spend?” began Blogget Sr. rubbing his palms together then reaching for a crumpet. “Castles don’t come cheap, you know.”

“I’d like a starter castle fit for a king,” said the Earl.

“Can’t do it,” laughed the builder. “We only build expensive kingly castles fit for kings. For instance, did you realize that we draw our blueprints on the finest parchment imported from across several oceans infested with sea dragons. That doesn’t come cheap. And we tile every roof with genuine handcrafted gold-encrusted tiles made by a clan of leprechauns.”

“I don’t care about any of that,” said Earl in confusion. “I just want a castle.”

“If it’s not impressive, nobody will think you’re a king,” noted the builder.

“How will the parchment and leprechauns make it any more impressive?”

The builder laughed. “If you can’t see that, you have no business being a king.”

The Earl then went to see Castles Are We: “That’s the royal WE,” joked the fellow who came to the shop counter to greet the Earl.

“What sort of parchment do you use for blueprints?” asked the Earl, not wanting to appear silly.

The clerk scoffed. “We don’t use blueprints, pal. We’ve got one design that fits all. It’s what you do with it that counts.” The man produced a picture of a small castle with a single tower and a few narrow crenellations. “You could use that tower for a master suite or a grain silo. Choice is yours. Cool, huh?”

“I don’t want to sleep in a grain silo,” sighed the Earl, and so he left the shop.

Outside, standing beside his mule and thinking that the dream of having a castle and becoming a king was all but lost, the Earl called out: “Can anybody help me?”

That’s when the Earl felt a polite tap on his shoulder and he turned around to find a smiling man who held a large key in his hand.

“What’s this?” asked the Earl.

“The key to one of the castles we built,” the man explained. “I thought you might like a tour. It’s just down the street and across the lake on that island. You can see it if you squint.”

The Earl squinted and he could just make out a distant turret or two rising from a small island in the lake. As he and the man walked toward the lake, they discussed the Earl’s needs.

“I see,” nodded the man. “You’re right of course that a king requires a castle. It’s the perception, you see. If the people see that you have a castle, they start believing that you’re a king. They take you seriously and they trust you. In fact, it’s quite important that the castle has certain features…”

“You mean like golden tiles and a grain silo?” interrupted the Earl.

“It sounds as if being king is more about the people than the king,” said the Earl, doubtfully.

“Indeed. That’s the price of being a king.”

They had come to the lakeshore where a boat waited to take them to the island castle.

“Are you ready to see what we offer, my lord?”

The Earl smiled and stepped into the boat. “Yes, I am,” he replied. At last he knew what he needed to become a king and who could help him achieve his goals. “By the way,” he asked, settling onto a comfy cushion, “how long have you been in the castle-building business?”

The man pushed the boat from the shore and hopped in. “Well,” said the man with a mysterious wink, “we’re not in the castle-building business. We’re in the king-making business.”

Whether you’re a king or a business owner, you need people to take you seriously. That begins with a website that is built by people who understand that the ultimate goal is not to build a website, but to build your business.